Welcome to the online home of Wessex Narrow Gauge Modellers!

Where to see members layouts(opens in a new tab)

The Wessex Narrow Gauge Modellers is a group of like-minded individuals who regularly meet throughout the year for a chat (usually over coffee and cake), with a chance to display the fruits of our labour from our chosen narrow gauge scale.  2020 marks the 20th Narrow Gauge South show and the group will be well prepresented with members layouts.

WNGM currently boasts forty members hailing from a wide area of the central southern region – from Bognor Regis in the east to Taunton in the west and from Shanklin on the coast of the Isle of Wight to Faringdon near Wantage – which to most of us counts as ‘up north’!

We try to hold meetings or at least get together at exhibitions and shows on a monthly basis.  Group news and developments are reported each month in the four-page WNGM Newsletter, see below for an example cover: 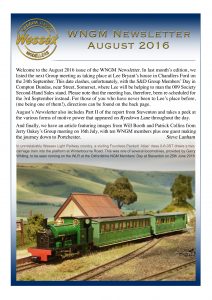 Originally founded in 1975 as the Wessex Area Group of the 009 Society, the group soon gained a reputation for high quality modelling covering a diverse range of narrow gauge subjects. Several members built notable layouts following what might be termed ‘main line’ narrow gauge practice in contrast to the ‘rabbit warren’ type layouts that were popular at the time. Over the years many group members’ layouts have featured in the modelling press, including numerous appearances in Railway Modeller and Continental Modeller, with several featured as Railway of the Month.

Our membership includes many who are well-known and established on the exhibition circuit, and who at our meetings are always willing to offer and impart advice and assistance regarding the various aspects of the hobby.

Although the group remains affiliated to the 009 Society, members modelling interests encompass a wide range of narrow gauge prototypes.  Ranging from the popular 3.5 mm and 4mmm scale gauge combination (including HOe, HOm, HOn3, HOn30, 009, 0012 etc). WNGM members’ interests also extend to the larger scales with examples in S scale, 7mm (O9, O14 & O16.5), 16mm and 7/8th scale including live steam. Members’ interests also include the ‘big stuff’ with individuals involved in various railways ranging from 7¼” gauge to 2ft and above.

We organise regular meetings, usually monthly. These often take place in members’ homes or at one or other of the specialist narrow gauge model railway shows that are held throughout the year. We also organise occasional visits to sites of railway interest; destinations in recent years have included the private Beeches Light railway and Statfold Barn Railway.

If you’d like to join us, or are just interested in learning a bit more, then drop a note to the webmaster at admin(at)narrowgaugesouth.org.uk

We look forward to welcoming you!